For the first time in history, the majority of people on earth will live to 60 years of age and beyond. This is true in high, medium and low-income nations. People are not only living longer, but they are working longer. In the U.S., 23 percent of workers are aged 55 and older. Over one-third of Canadians over the age of 55 are still working and in the UK, workers over 50 comprise 27% of the workforce. In Australia, labor force participation, (those working or actively looking for work), for those 55 and older has never been higher. The demographic shift towards an aging workforce brings both unprecedented opportunities and challenges for organizations that want to attract and retain talent.

The Deloitte 2018 Global Human Capital Trends Study notes that “population aging poses a workforce dilemma for both economies and organizations. Thirteen countries are expected to have ‘super-aged’ populations—where more than one in five people is 65 or older—by 2020, up from just three in 2014. These include major economies such as the United States, the United Kingdom, Japan, Germany, France, and South Korea. China’s 65-and-older population is projected to more than triple from approximately 100 million in 2005 to over 329 million in 2050. In fact, analysts have estimated that 60 percent of the world’s population over 65 will live in Asia by 2030.”

The study notes that almost all developed economies have a birthrate below the “replacement rate,” or the rate of babies born that will ultimately replace previous generations, leading to a potentially catastrophic talent shortage. Citing the example of Japan, now the world’s oldest country in terms of population, a shortage of approximately 1 million workers in 2015 and 2016 is estimated to have cost the economy $90 billion.

To bolster its declining talent pool, Japan changed its laws so that descendants of Japanese citizens living abroad would be attracted by newly available long-stay visas and work permits. It had particular success in attracting workers from Brazil with as many as 320,000 Brazilians of Japanese descent working in Japan ten years ago, although that number has decreased in recent years. China also faces a steep plunge in its working population in the coming years and has made it easier for those of Chinese descent to live and work there.

Despite these developments in Asia, addressing a workforce shortfall through immigration appears to be an increasingly remote option for many advanced economies. A recent article in the Economist explains that the trend in many countries has been to place increased barriers to foreign talent. For organizations seeking to successfully navigate this demographic reality, success may depend on leveraging the talent of an older workforce, mentoring, succession planning and redefining the concept of retirement from work.

Creative solutions which include accommodating the needs of older workers can help utilize their talent and positively impact a corporation overall. The Economist cites an example from BMW:

“When BMW, the German car maker, faced an outflow of workers it applied an adaptive approach for older workers with great success:…facing an imminent outflow of experienced workers, [it] set up an experimental older-workers’ assembly line. Ergonomic tweaks, such as lining floors with wood, better footwear and rotating workers between jobs, boosted productivity by 7%, equaling that of younger workers. Absenteeism fell below the factory’s average. Several of these adjustments turned out to benefit all employees and are now applied throughout the company.”

Older workers, especially those with significant tenure in an organization and industry, can serve a critical role in its talent lifecycle. Older employees can become employer brand ambassadors by effectively sharing their success stories with prospective candidates as part of an organization’s recruitment marketing messaging. Older employees can be mentors for new workers being onboarded that not only teach necessary skills but also help acclimate a new employee to the organization’s corporate culture. If a company’s workforce is reflective of the economy as a whole, then it should plan to see an exit of at least one-fifth of its employees due to retirement in the next ten years. These older workers form a natural base for a mentorship program which can play an essential role in succession planning.

The days when turning 65 meant the end of working life appear long gone. Some workers past the traditional age of retirement have no choice but to continue working due to a lack of savings. Others choose to keep working, on a full or part-time basis, or as consultants. Companies will also have to compete with the trend towards entrepreneurship for talent 65 and over because this age group is more likely than any other to be self-employed.

Having the Competitive Advantage

What does an aging workforce mean for the overall talent strategy of your organization? Does your organization have the necessary insight into the challenges and opportunities that an aging workforce presents? If not, this expertise can be provided by recruitment experts such as a recruitment process outsourcing (RPO) company. Whether your strategy is developed in-house or with a partner such as an RPO, the current tight job market drives the need to build a talent program that integrates the reality of this important workforce demographic. As the Deloitte study concludes “The demographic math is undeniable: As national populations age, challenges related to engaging and managing the older workforce will intensify. Companies that ignore or resist them may not only incur reputational damage and possible liabilities but also risk falling behind those organizations that succeed in turning longevity into a competitive advantage.” 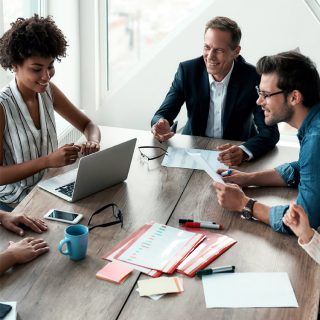